You are: Home » British coins » Articles » Una and the Lion - Most beautiful coins ever produced

Una and the Lion - Most beautiful coins ever produced 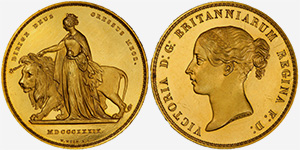 One of the rarest coins in Great Britain, and a coin much sought after by collectors, is the Una and the Lion five pounds. This was a gold coin from the reign of Queen Victoria that depicted the young queen symbolically leading the British Lion: the young Victoria as Una, only 20 years old but still radiating power and poise, leading the lion, a representation of the British Empire.

This coin, with a limited mintage of 400 struck exclusively for inclusion in Victoria's 1839 Proof set, was designed by the Mint engraver William Wyon, who was one of the foremost engravers of his generation. It was inspired by Una, the protagonist in the first volume of the Elizabethan poem The Faerie Queen of Edmund Spencer. He was also responsible for the portrait of Queen Victoria used on the famous Penny Black stamps.

Una and the Lion by Briton Rivière.

The Royal Mint has thirteen specimens of the coin at different stages in its life and several varieties exist (see Wilson and Rasmussen), which doesn't significantly affect the value and are mostly irrelevant to the collector. Considered to be one of the most beautiful coins ever produced, the inscription DIRIGE DEUS GRESSUS MEOS means May God Direct My Steps and VICTORIA D: G: BRITANNIARUM REGINA F: D:, which is Latin for Victoria by the Grace of God.

The dies and the lettering segments that gave the coin its raised-letter inscription around the edge were preserved.